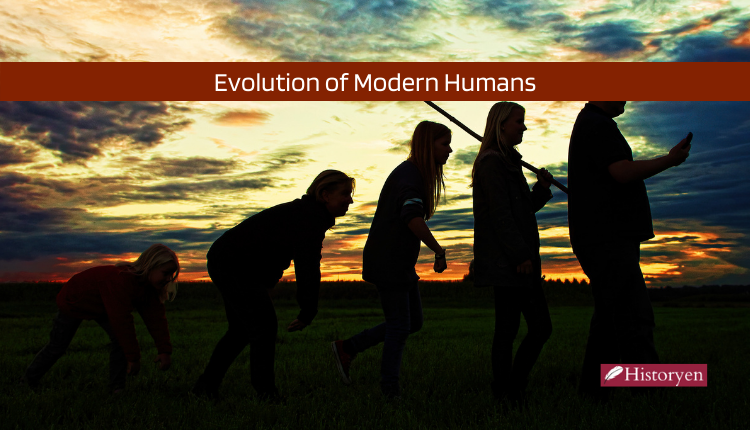 Although it is rumored that humans are descended from monkeys, it is also said that they are descended from many other animals. But scientists give the most logical information about the evolution of modern humans. Five new Homo sapiens fossils found in North Africa show that the first humans appeared more than 100 thousand years earlier than previously estimated. According to the new findings, the evolution of humans occurred simultaneously from various points of the African continent. Throughout history, people have tried to explain how they existed, but at that time they clung to mysticism due to the fact that science and technology were not sufficiently developed. Man was shown as a separate being from nature, living in nature. In ancient religions, there were semi-abstract and semi-concrete thoughts, while monotheistic religions brought a break from a completely abstract nature. It was created from mud by a human force. Whereas in reality man is a part of nature that comes from nature. Like all living things, it was formed as a result of evolution in man.

The researchers found that the genetic and fossil records do not reveal a single point at which modern man appeared. The researchers argue that when the modern human lineage is limited to a specific place of birth, no defined time point can be determined. The known patterns of the first appearance of anatomical or behavioral features, which are often used to describe Homo sapiens, fit into a number of evolutionary histories. Interdisciplinary analysis of the growing genetic, fossil and archaeological record will undoubtedly reveal many new surprises about the origins of the modern human lineage.

The modern type of man, that is, our species, Homo sapiens, means “wise man” in Latin. Our species is the only surviving species of the genus Homo, but exactly where the origin of modern man came from is still a matter of debate today. Further evidence for the theory of reproduction from Africa can be found in the dimensions of the human skull. After studying the genetics and skull measurements of 53 human populations from around the world, scientists found that the genetic structures of populations become less diverse as they move away from Africa. This may be because human populations have shrunk as they have spread from their original settlements in Africa, and therefore the genetic diversity in these populations is less. As a result, scientists note that modern humans cannot have originated in different places, but instead must have come from a single region, Africa.

It is difficult to say when fossils first showed a modern man with all his representative features. For example, the 195,000-year-old skull found in Ethiopia looks very similar to a modern person, while another skull found in Nigeria looks very ancient, although it is only 13,000 years old. These discrepancies indicate that the evolution of man is nonlinear, that is, there is no single point where all people are modern people. As people acquired modern anatomy, the way they lived and the tools they made also changed. About 300,000 years ago, during the Middle Stone Age, people roughened the ends of finely machined tools, connecting them to handles and spear handles, and there was a leap in tool technology. Our hunting skills have greatly improved. Just as with fossils, tool developments are occurring in different places and times, indicating that these tool technologies have been developed and shared by different groups of people. There may also be other people among these groups who are not part of our own lineage.