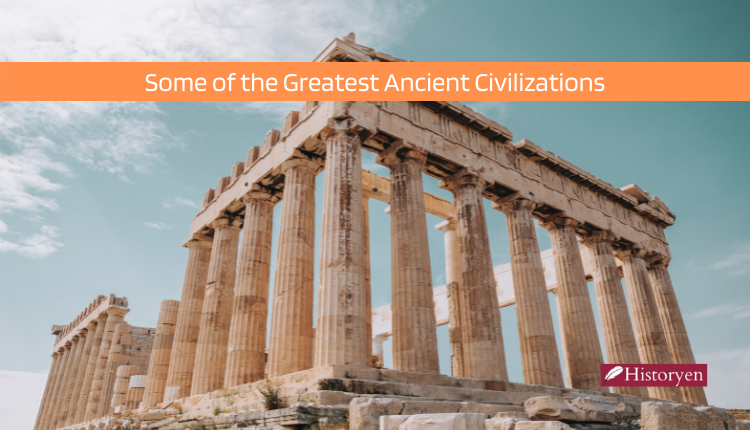 Although many sources show that Antiquity and the First Age are the same, Antiquity began approximately 900-950 years before the First Age. Antiquity, which began with the history of mankind, is the name of the period that lasted until the Middle Ages. In ancient times, oral literature, poetry, theater, and philosophy developed. Many civilizations lived during this period. Ancient civilizations were the most important societies of that era. Some survived for short periods, while others persisted for centuries. We will try to give you brief information about the biggest ancient civilizations.

There is little evidence of Ancient Rome, founded in 753 BC. But the kings who ruled Ancient Rome were not despots, as in Europe or the East. Although the empire was called Byzantium, it was not a name used among the people living in Byzantium. They identified themselves as Romans.

The archaeology of Ancient China (1600-221 BC) provides insights into historical events that date back to about four and a half thousand years AGO and date back to 2500 BC.

In Babylon (2300 BC), one of the civilizations of the Early Ages, it was believed that the king was in power thanks to the gods; moreover, they thought that their king was also a god. Thanks to this, the king had established a bureaucracy and a central government with incredible laws, a taxation system, and compulsory military service to maximize his power and control.

The once Primitive civilization of ancient Phoenicia (2500 BC) is now known as Lebanon and includes parts of Syria and Israel. Although Alpha and Beta are the Greek letters that make up the current alphabet, this alphabet comes from the Phoenicians at its core.

The Assyrians wanted not only independence but also control. Under their leader Tukulti-Ninurta (1233 – 1197 BC), known in legends as Ninus, the Assyrians began to conquer Babylon. With its ruler Tiglath-Pileser (1116-1090), they also expanded their empire into Syria and Armenia. The Assyrians exiled the conquered societies for the sake of gaining control, just as the Hebrew were exiled to Babylon.

Mesopotamia, one of the First Dec civilizations founded in 4000 BC, is an ancient land between the Euphrates and Tigris rivers. It roughly corresponds to modern Iraq. This word does not refer to a specific ancient country, but to a region in the ancient world that included various, changing nations. Mesopotamia to the land between rivers.

The First Age civilization of the ancient Sumerians (4000 BC) laid the foundation for dozens of civilizations that originated in modern-day Southern Iraq. The first writing and astronomy studies in the Mesopotamia region were also carried out by the Sumerians. For a long time in the history of the most ancient civilizations, it was believed that they originated in Sumer, in Mesopotamia, which is more or less Iraq today.