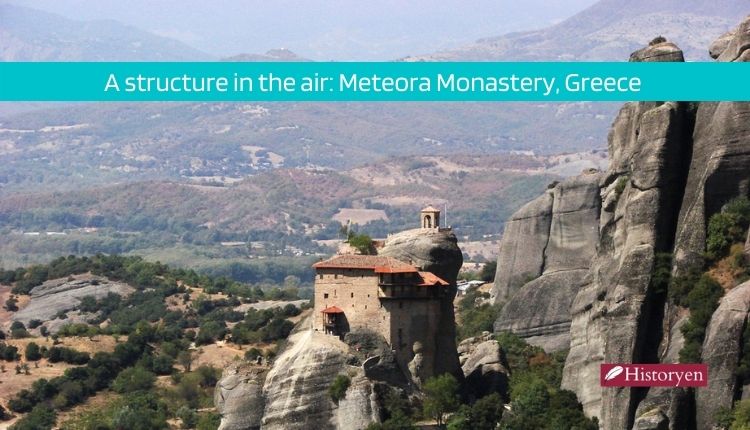 A structure in the air: Meteora Monastery, Greece

We will introduce you to one of the most interesting structures in the world. Meteora Monastery in Greece is a historical building that does justice to the meaning of its name. Meteora, meaning “hold in the air” in Greek, is a majestic structure built into the rocks. This magnificent structure, where those who see it for the first time feel like they are in a fairy tale world, was built exactly 800 years ago in Greece. Let’s even give you a tip; the most memorable episodes of the Games of Thrones series were shot here. This monastery was not only used as a religious center. Activities were also carried out in academic and social areas. In short, we can say that it was a life complex.

It was built in Kalabaka, located in the Thessaly Region, 250 km from the center of Greece. Built on massive rocks 300 to 500 meters high, this structure feels as close as you can reach to the clouds. This structure, built by the Meteora Monasteries, is one of the most interesting structures in the world. It is parallel to the flat valley in the south of the Pindus Mountains. These rocks, on which houses and buildings were built, are estimated to date back 60 million years. The monks who wanted to go to heaven preferred to live in these buildings and started to live in this monastery built in the 11th century. Today, it is used purely as a tourist attraction. Restored in the concept of a museum, Meteora Monastery is one of the most visited touristic structures in Greece.  You can still see the baskets used to carry food and supplies to the buildings on the rocks on this tour. Witnessing the life of centuries ago will excite you.

Meteora’s history goes back to 23,000 years ago. Traces of ancient embankments built to protect against the wind can still be seen in the caves around here. 9. after the XVIII century, especially the 14th. In the XIII century, it has become a territory where ascetic groups and interstitials gather. Charming monasteries, which are the most tourist attractions of Meteora, are also often found in the 14th century. It was made in the XIX century. With its nature, villages, air, and “monasteries in the heavens”, Meteora is a must-see place.

Meteora’s natural sandstone hills, 9. It was used by monks who wanted to retreat and get closer to God by breaking away from the outside world before monasteries were built around the turn of the century. Then in the fourteenth century, monks built more than 20 monasteries on the peaks of these rock pillars, so that they were both protected from invasion and attacks, and also created a habitat here. During this period, when there were not even steps reaching the monasteries, the monks who reached them with ropes or ladders that they retracted after using them decorated the interiors of some monasteries with frescoes that also dazzled. Christian communities that came to the region in the eleventh century first began to live in underground cities consisting of caves. Later, they felt the need to rise higher for security in an environment of constant war and confusion in the region.