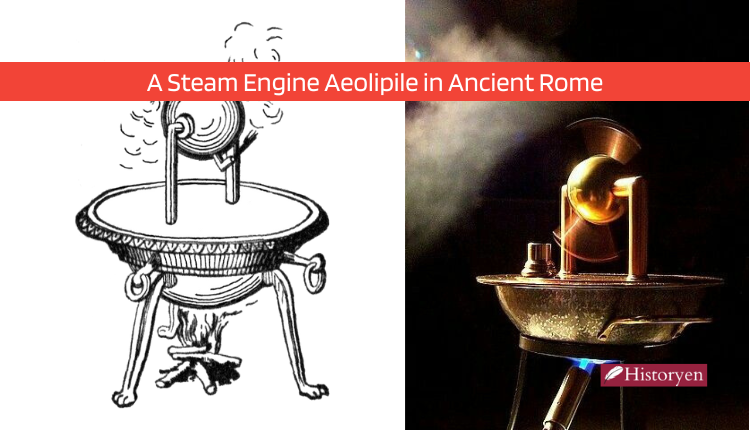 The aeolipile, also known as the Hero Engine, is a simple radial steam turbine that rotates when the water container is heated. The Hero of Alexandria device was found in Egypt in the 1st century AD. Considered the first steam engine or reaction steam turbine in history, Aeolipile means “ball of Aeolus“. Aeolus is the Greek god of wind and weather.

Aeolipile is a vessel with a simple rotating part like a cylinder, with oppositely bent or curved nozzles arranged to rotate on its axis. As a result of items 2 and 3 of Newton’s laws of motion when pressurized with steam, steam is ejected from the nozzles, which creates thrust due to the rocket principle. Nozzles pointing in different directions generate force along different lines of motion, causing the ship to spin on its axis. The aerodynamic drag force builds up rapidly with increasing rpm and generates accelerating torque, eventually reaching a constant speed.

Heron took a practical approach to the Aeolipile. Vitruvius, on the other hand, explained the use of the Aeolipile in a more complex way. The US Navy recognized the Aeolipile’s contribution to steam engineering and began using it.

Hero was a prolific author and renowned engineer, with seven known books. He is thought to have invented the first wind-powered machines, the first syringe, and many mechanical devices. Hero, who invented the Aeolipile and published diagrams about his invention in his work Pneumatica, even used this invention to open the temple doors.

Hero had also improved the efficiency of the hand water pump invented by the Greek engineer Ctesibius around 200 BC. The Romans used the Hero’s pump and mechanical fire hose to put out fires for a long time. Creating the world’s first impeller turbine and a practical rotary steam-powered water pump, Hero had found a better way to pump water into cisterns by improving Roman waterworks and aqueducts. In this way, better irrigation, baths, sewage systems, toilets, sanitary systems and other structures were built for the valuable fields of the Roman nobility.

Hero’s steam-powered water pump was heated with wood harvested by slaves. Pumps worked well in filling high cisterns, creating a great pressure of water for entire neighborhoods in Roman cities. Until then, the cisterns were filled using hand-operated chain pumps. High water cisterns were massive energy storage devices. The flow of water from high to low cisterns could be used for cutting wood, powering small machinery, grinding bread, and many other things.

Both Roman and Greek cultures used large numbers of brains and labor-saving machines. There were many Roman and Greek engineers, such as Hero and Ctebius, who invented such machines. Engineers are known to be very poor and miserable because their talents are not appreciated as much as they should by the nobility. Despite this, engineers continued to make new inventions while maintaining their productivity.

Calendars Throughout History: An Overview