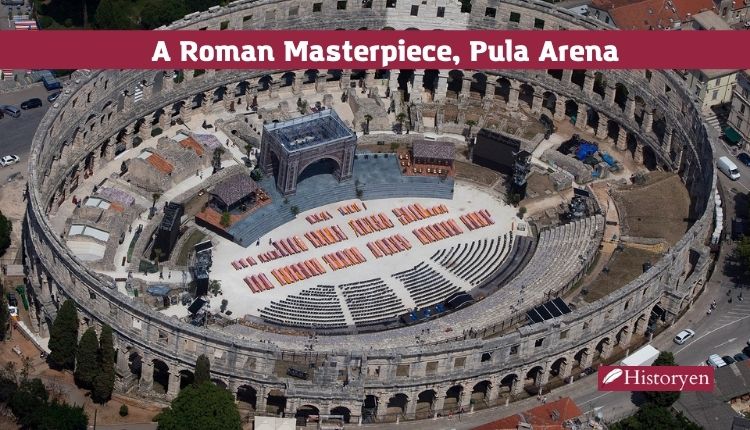 The Pula Arena is one of the Roman architecture masterpieces located in Croatia. Its construction took about almost 100 years and was completed in 68 AD. It served as an amphitheater for the Roman community for many years and today, it is the only arena, in which four side towers managed to be preserved. Another important feature of Pula Arena is it is the six largest Roman arenas that managed to survive until today. Surprisingly, this Roman masterpiece is also the best-preserved monument in the country. Moreover, the picture of the arena was also issued on the back of 10 kuna banknotes.

Just like most of the other buildings built during the Roman period, the exterior walls of Pula Arena were made of limestone. Romans also decided to prefer two stories on all sides but the one that faces the sea. Due to the possible corrosion of the salty water, they preferred three stories in the construction of this part. There are 15 gates in the arena and just like most Roman architecture, there are plenty of underground passageways. These passageways were used for the animals and gladiators. Without a doubt, you can witness the amazing ancient building techniques in this structure.

As we mentioned before, Pula Arena was completed in 68 AD. Its construction took 95 years and began in 27 BC. During these times, Pula was the regional center for the Roman Empire, and it was known as Pietas Julia. The arena was built outside of the city right on the road between Pula and Aquileia. Pula Arena was originally built in timber and then replaced by stone. The completion and upgrades of the structure were carried out under three different emperors. Today, you can visit this amazing monument and witness the history whenever you want.