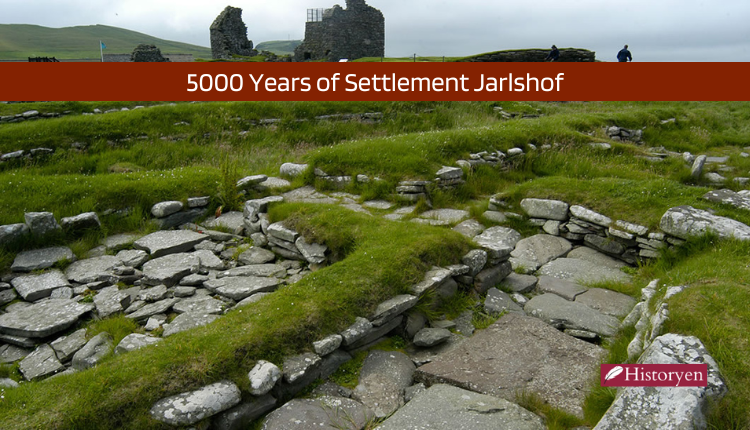 Jarlshof, located in Shetland, Scotland, is the most famous prehistoric archaeological site in Britain.

The area was discovered after some of the coast was washed away by violent storms in the late 1800s, exposing the existence of ancient buildings.

The buildings on the property include the remains of a Bronze Age forge, an Iron Age brochure and a round house, a complex of picturesque wheelhouses, a Viking ship and a medieval house.

The remains of the site represent thousands of years of human habitation and are a microcosm of Shetland history. Jarlshof contains the most extensive remains of a Viking site visible in all of Britain.

Visitors can visit the Iron Age brooch and wheelhouses, the Bronze Age oval houses, and the Visitor Center with a rich collection of artifacts from different eras.

Visitors can also see the dilapidated Old Sumburgh House, which was originally a medieval stone house and was later converted into a fortified house in the 16th century, modernized and then abandoned in the 17th century. The stones in the garden apparently mark the graves of drowned sailors.

This fascinating place is located on the southern tip of mainland Shetland, where the North Sea meets the Atlantic Ocean. It is one of the most important and largest sites in Europe at different periods and has an almost continuous occupation from the first Neolithic farmer until the 17th century, when Earl Stewart ruled.

One of the most fascinating things about the Jarlshof site is that it has been inhabited almost continuously for 5000 years, giving us a clear picture of Shetland’s buildings over the years.

The area is a must-see for anyone visiting Shetland. In chronological order, visitors travel through the centuries of Shetland’s human history. Visitors end their walk-through time with the now dilapidated but once magnificent 17th-century Laird House.

After a series of severe storms in the winter of 1896/97, parts of the area were exposed to coastal erosion. Landowner John Bruce of Sumburgh conducted preliminary excavations and, realizing the site’s importance, turned it over to the state in 1925, who conducted systematic excavations for the next 50 years – stopping only for war. The excavations have greatly expanded our knowledge of former Shetland society; how they lived, worked and ate.

There are trails around the place and the journey is in chronological order. The grass on the walls and structures consolidates the area and preserves it for the future. Historic Scotland maintains the Jarlshof and the place is open all year round (the visitor center is only open during the summer season).

Jarlshof is a fully immersive experience that seductively brings visitors closer to the society of the past on this southern Shetland peninsula.

Getting to Jarlshof by Public Transport

There are a number of options for public transport and buses stop nearby. The nearest stations to the Jarlshof are Hotel Rd End, Sumburgh, which is a 7-minute walk away. Grutness Shetland Ferry Terminal, which operates the SF7 Ferry, is a 15-minute walk away.

Secrets of the Voynich Manuscript