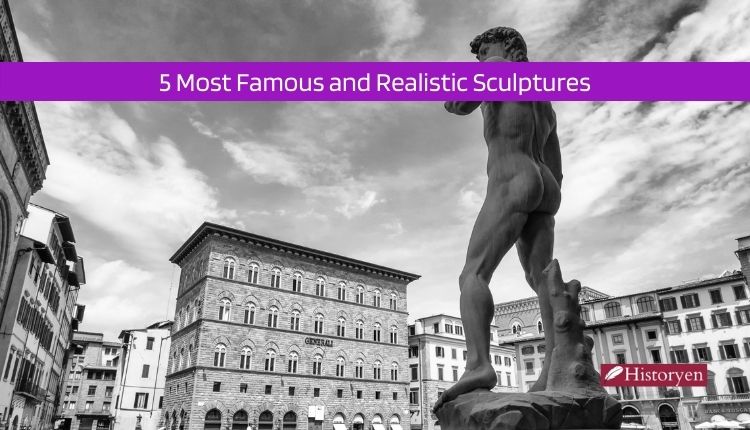 Sculpting is one of the art forms, which many talented artists preferred to express their perspective and show off their skills. This is why we wanted to compile the top 5 most famous and realistic sculptures for you in this article. We bet you are going to love all of them!

This realistic sculpture was sculpted by Auguste Rodin, one of the most famous French sculptors. It is representing an incident from Hundred Years’ War, which took place between France and England. The sculpture depicts six elders who volunteer for execution in exchange for mercy for their people.

This sculpture was sculpted by Gian Lorenzo Bernini to be exhibited in the Church of Santa Maria della Vittoria. It is considered one of the best examples of High Roman Baroque style and realistic sculptures. It depicts the meeting of a Spanish nun with an angel.

This worldly-famous realistic sculpture was discovered in 1912 and it portrays the bust of Akhenaten, who is one of the most controversial pharaohs. In addition to this, most experts regard this sculpture as the symbol of feminine beauty. Considering the date on which it was sculpted, it is also regarded as one of the best examples of sculpting.

Without a doubt, David is one of the most iconic and realistic sculptures in the world. It was carved on a single piece of marble by Michelangelo. The most notable detail about the sculpture is Michelangelo was only 26 years old when he completed it. You can visit the original sculpture in Florance.

Laocoön and His Sons, 2nd Century BC

This is one of the most well-known Ancient Roman Empire realistic sculptures that managed to survive until today. It depicts the sea god Poseidon. It was discovered in 1506 and today, you can witness the original sculpture in the Vatican.

Neuschwanstein Castle, the Most Interesting Castle in the World

Top 5 Archaeological Museums in the World