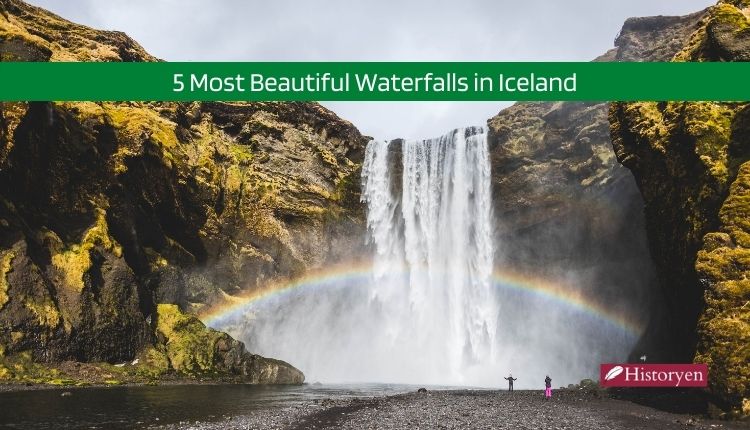 More than 10% of Iceland’s land mass is covered by glaciers, so thousands of rivers have been formed by the flowing waters of the melting glaciers. These rivers pass through rugged areas, reaching cliffs and steep slopes. The waters that flow epically down these slopes create wonderful waterfalls. Thousands of waterfalls, large and small, are each of great beauty and enchant visitors. In this content, we will introduce some of the most beautiful waterfalls that we have had difficulty choosing. We put the highest waterfall in the first place.

Reaching a height of 198 meters, Glymur is Iceland’s highest waterfall. You can drive from Reykjavik to Hvalfjördur. After that, a very high road welcomes you. Along this path, we can inhale oxygen into our lungs. At the same time, since it is a dangerous road, you can see visitors wearing helmets. While walking on the road, at one point you will cross the river by stepping on a log. After a somewhat dangerous walk of at least 2 hours, you can climb to the top of Glymur and watch the magnificent waterfall view. It is also dangerous to descend from where you are climbing, so be sure to start descending at least 2 hours before dark.

Since Iceland is a waterfall paradise, you can encounter a lot of waterfalls even while traveling within the country. But none will be as high as Glymur Falls.

Fjallfoss Falls, the largest waterfall in the Westfjords, is on rugged terrain and is 60 meters wide. Also known as Dynjandi, this waterfall consists of seven waterfalls with a total height of 100 meters. Named Dynjandi, meaning thunder in Icelandic, the waterfall takes visitors through a doorway to eternal peace. Photos taken from the bottom of the waterfall with a wide-angle lens will look great on your social media profile.

There are many small waterfalls on the way to Fjallfoss. You can find a map where these waterfalls are marked. The road to the waterfall is steep, so be careful to keep control of your car both as you ascend and descend. After parking your car, you have to walk for 15 minutes on a rocky path until Fjallfoss.

This waterfall is located in Northern Iceland, at the end of the Skjalfandafljot River. It has a name meaning Waterfall of the Gods. This waterfall, which can be easily visited on the journey between Lake Myvatn and Akureyri, resembles Niagara Falls in appearance. Although the waterfall can be seen from both sides, visitors generally prefer to go to the east coast.

Godafoss, which is a cool and majestic waterfall in summer, turns into a natural ice sculpture in winter. The waterfall, which turns into a column of blue and white ice during the winter months, becomes the scene of an image that you will never see again in your life. The story of its name comes from the fact that statues of Scandinavian and Pagan gods were thrown into this waterfall in the year 1000 when Christianity became the official religion of Iceland.

A 2-hour drive from Reykjavik, this waterfall is one of Iceland’s popular and frequently visited destinations. You can watch the magnificent view of the pouring water by walking behind the waterfall. Seljalandsfoss is a waterfall in a meadow, so it is surrounded by colorful wildflowers in spring and summer. If there is enough sunlight, you can see a rainbow when you approach the waterfall and find the right angle. You can walk where the waterfall spills, but you need to be careful not to slip your feet and be ready to get wet.

Located on the Hvítá River, Barnafoss Waterfall is a waterfall that can be reached by a bridge crossing the river and a hiking trail. Its name means Child’s Waterfall in Icelandic. Its story is based on two children who disappeared after their parents followed them to the natural stone bridge over the waterfall. It is thought that the children fell into the water and drowned because they could not be found after they were lost. The stone bridge over the waterfall collapsed on its own in the course of time and disappeared.