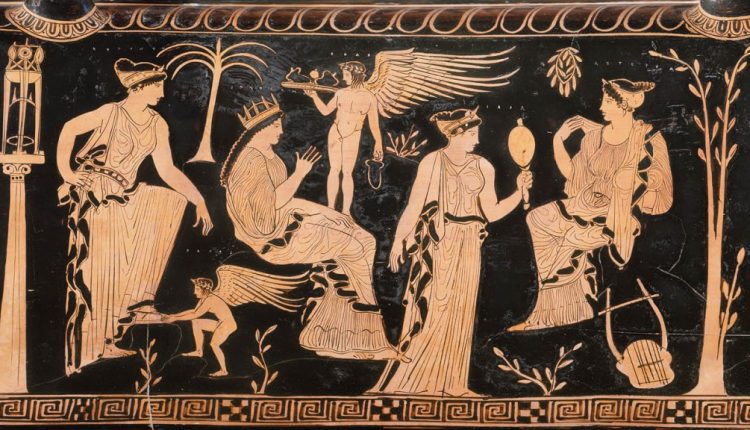 When you think about Greek goddesses, who comes to mind?  Perhaps it’s Hera, goddess of marriage, or Aphrodite, the goddess of love.  Maybe you think first of the brilliant Athena or the chaste Artemis.  Greek mythology is filled with stories of powerful goddesses, many of which remain popular to this day.  But there are also many incredible goddesses that often get overlooked.  Some are all but forgotten.  Today, let’s take a look at a few of the lesser-known Greek goddesses and resurrect their incredible stories.

Asteria is a goddess belonging to the ancient race of gods known as the Titans, who ruled before the Olympian gods took the throne in ancient Greece.  As the goddess of the stars, Asteria ruled over the night sky and shooting stars as well as nighttime divination through dreams and astrology.  The daughter of Titans Coeus and Phoebe, Asteria is the sister of Leto and mother of the goddess of witchcraft, Hecate.

Though a minor goddess, Asteria plays an incredibly important role in Greek mythology.  Legend tells us that Asteria once caught the attention of Zeus, the king of the Greek gods.  Knowing that little good ever came with an affair with the mighty lightning god, Asteria fled from him across the sky in the form of a quail.  Though Zeus pursued her in the guise of an eagle, Asteria escaped by plunging into the Aegean Sea.  There, she became an island, untethered and floating freely on the waves.  Some say she became the island of Asteria, “the island which had fallen from heaven like a star,” while others say she transformed into the island of Ortygia, “the quail island.”

Regardless of the name of the island created from the goddess, she would later gain a new, and lasting name.  Leto, Asteria’s sister, had also caught the eye of Zeus and became pregnant with the god’s twins.  Hera, Zeus’ wife and queen of the gods, enraged by Zeus’ infidelity gave chase to Leto.  With Hera’s rage following her, Leto could find no place to rest and give birth until she came to the island that had once been her sister.  Promising the land that it would receive rich blessings, Asteria agreed to allow Leto’s mighty son Apollo to be born on her rocky soil (some legends say Artemis was also born on the island, others that she had already been born when Leto arrived on Asteria).  Afterwards, Apollo renamed the island Delos, a name it carries to this day, and anchored it in place so that it was no longer forced to float aimlessly through the Aegean.  Delos, once the starry goddess Asteria, became a blessed and sacred land for Apollo’s devotees.

Greek mythology is full of tales of ancient and terrible sea monsters lying in wait for unsuspecting sailors to pass by.  Tales of creatures like Scylla, the six-headed sea monster, and Charybdis, the mighty and inescapable whirlpool, filled men with terror.  Seafaring was incredibly important to the Greeks, and though they excelled at it, they also knew the depths held many, seemingly supernatural, dangers.

The goddess of those horrifying creatures lurking in the deep was Ceto, one of the oldest deities in ancient Greece.  Born of Pontus, the primordial sea god, and Gaia, the earth itself, Ceto was older than both the Olympians and the Titans.  With her brother, Phorcys, Ceto birthed numerous terrifying beings.  Among them were the Graiae (the Grey Ones), the Gorgons, the serpent Ladon, and the half-woman, half-snake Echidna.

While most Greek deities possess both positive and negative aspects, Ceto was always portrayed as a merciless and cruel goddess.  Though little is now known of her, Pliny the Elder does mention that she was worshipped in the city of Joppa (Jaffa).  He wrote in his Natural History, “Joppa is said to have existed before the flood; it is situated on a hill, and in front of it is a rock on which they point out the marks made by the chains with which Andromeda was fettered; here there is a cult of the legendary goddess, Ceto.”

The goddess of childbirth and labor pains, Eileithyia was the daughter of Zeus and Hera.  Depending on her mood, Eileithyia could hasten delivery of a child or prolong it.  Devoted entirely to her mother, the queen of the gods, she is often found in mythology catering to the demands of Hera.  This often had disastrous consequences for the illegitimate children of Zeus.  When Leto was searching for a place to birth twins Artemis and Apollo, Hera sent Eileithyia away to the far north home of the Hyperboreans to prolong Leto’s labor and increase her suffering.

Another of Zeus’ children had his fate completely altered thanks to Hera and Eileithyia.  Zeus, anxious for the arrival of his demigod son by the mortal Alcmene, boasted to the assembly of gods that he would make the child born on that day the king of Mycenae.  Hearing this vow, Hera hastened to Eileithyia and persuaded her to prolong the birth pains of Alcmene while forcing another child, Eurystheus, to be born two months premature.  Forced to abide by his word, Zeus had Eurystheus crowned king while Alcmene’s son, Heracles (Hercules), went on to live a life of torture at the hands of Hera.

Pregnancy and childbirth were difficult and dangerous in ancient times.  It’s not surprising then that worship of Eileithyia was very popular, especially among women.  Many sites have been found throughout Greece where people would leave offerings to the goddess, praying that she would aid them in a safe and easy birth.  In Crete, people celebrated her birth at a cave in the region of Knossos.  Though this is the first known example of her worship, it’s possible that Eileithyia existed in some form as far back as the Neolithic age.

Described by the poet, Homer, as clad in saffron robes with rosy fingers and braided hair, Eos was the beautiful goddess of the dawn.  Born of the Titans Hyperion and Theia, Eos was the sister to the sun god, Helios, and the moon goddess, Selene.  Each morning, Eos would rise from her slumber at her home on the edge of Oceanus (the mighty river that encircled the world), mount her chariot, and race across the sky, heralding the arrival of her brother and the light of a new day.  At times, Eos would accompany Helios throughout the day so that she was sometimes seen at dusk as well.

Eos took the Titan Astraeus as her husband and with him gave birth to many beautiful children.  Among them were the Anemoi (the four cardinal winds), Eosphoros (the morning star), the Astra (stars), and Astraea (goddess of justice, not to be confused with Asteria).  But Eos also suffered from a terrible curse placed on her by Aphrodite, the goddess of love, which filled her with an insatiable lust for mortal men.  Through her many lovers, she bore other children including the hero Memnon whose death would come at the hands of the mighty Achilles.

Although many poets, from Homer to Sappho, wrote of her divine beauty and important role, we do not know of any shrines or temples built to honor Eos.  It is possible that worship of Eos was performed alongside her brother, Helios, but no proof of it has yet been found.

Goddess of strife and discord, Eris is often found in the presence of the war deities, Enyo and Ares.  Hesiod claimed that Eris was daughter of Nyx (Night), but Homer presumed that she was sister to Ares, making her a child of Zeus and Hera.  Regardless of her parentage, Eris reeked destruction wherever she went and was even responsible for one of the greatest episodes in Greek mythology – the Trojan War.

Outraged that she alone was left uninvited to the wedding of Peleus and the goddess Thetis, Eris decided to stir up trouble among the attending guests.  She did this by tossing a golden apple, the Apple of Discord, into their midst.  Labeled as a gift “for the most beautiful one,” the apple was immediately seized by Aphrodite, Athena, and Hera, each declaring that it must be meant for them alone.  To solve the dilemma, Zeus appointed the young prince, Paris, as the judge that would choose the most beautiful of the three goddesses.  Each promised him various gifts and riches, but in the end, he chose Aphrodite who had promised him the hand of the beautiful Helen.  Helen, however, was already married.  Her abduction by Paris, who fled with her to his home of Troy, became the catalyst that eventually led to the disastrous ten year Trojan War.

Eris reveled in the brutality of the Trojan War, haunting the battlefields with an insatiable appetite for blood and destruction.  She also birthed many terrible children including Ponos (hardship), Limos (starvation), Phonoi (murder), Psuedea (lies), and Ate (ruin), that constantly plagued the lives of men.  The Greeks had no love for Eris as her presence brought only destruction.  Like the war god, Ares, she was not worshipped.

Join me next time as I introduce you to five more lesser-known Greek goddesses: Hebe, Melinoe, Nike, Psyche, and Tyche. If you enjoy my work, please follow me over on Facebook at Laurie Martin-Gardner, Author and Artisan or visit my website at www.lauriemartingardner.com.